"Director Michael McKelvey takes fine advantage of that focus as he weaves the storylines together into their intricate telling. McKelvey's blocking is especially notable in that it reveals his eye for a well-composed stage picture. There are moments that one can freeze in tableaux, as in a stereoscope card of the day, that tell so much of the story through the visuals." - NOLA.com

"Director Michael McKelvey allows this "My Fair Lady" to be "My Fair Lady," letting the musical stand on its own as a piece of its time. In doing so, the greatness of the show stands out, and can still speak directly to our times, precisely because it is a comedy offering a witty and penetrating look at class, sexual politics and dynamics, as well as identity itself." - NOLA.com

MILLION DOLLAR QUARTET/Rivertown Theatres, Jan. 2018
"Moving the show at a breakneck pace, Michael McKelvey directs with a smooth hand, almost unseen as the actor-musicians maintain a genuine sense of spontaneity. The sheer joy of performing, even just for one another in the studio, comes through, along with the competitive drive that would propel each to stardom."  Times-Picayune


"Michael McKelvey strikes absolute gold with a cast that is almost as perfect were the real-life characters to magically been summoned back from the past...His fresh take on this recent Broadway hit is every bit as good, if not slightly better than the national tour that swung through New Orleans a few years back." WYES-TV​


"With little action, the performers are boldly exposed onstage. Each move and gesture must be carefully thought out, for any false notes would shatter the mood. Director Michael McKelvey recognizes this and guides Owens and Watkins through the shifting perspectives with delicacy and nuance. McKelvey and his cast also smoothly navigate the tone of the piece, transitioning from moments of disappointment and anger to simple silly bits of humor to a deeply heartfelt longing."  New Orleans Times-Picayune

​“McKelvey’s direction of the production is brilliant…” – Theatrecritism.com


“In a staging that displays wisely thought-out choices made in nearly every aspect, director Michael McKelvey and his team present one of the strongest renditions of the musical that local audiences have seen.” – Times-Picayune

HAIRSPRAY/Summer Lyric Theatre, July 2017
“The show’s humor is edgy, but its rendering is brilliant and heartwarming under the masterful direction of Michael McKelvey.” – Gambit Weekly

HAND TO GOD/The Storyville Collective, April 2017
“Hand to God,” receiving a deft production by the Storyville Collective...and smartly directed by Michael McKelvey.... McKelvey, flawlessly in tune with Askins’ desire to shock and scandalize, knows this play works best as a modern farce with bite (literally as the Act One curtain attests)…McKelvey handles this plot with dexterous swiftness, eliciting refreshing honesty from all of his first-rate actors.” – The Advocate

“Legally Blonde is very easy to love – all you really need is a cast that's committed to wringing every last drop of joy from a show that's saturated in the stuff, and a director who knows how best to set them loose.”  - Austin Chronicle

​10 Reasons I Stayed in Love with Theatre in 2013 - Robert Faires, Austin Chronicle


“Michael McKelvey and his gang of top-notch musical theatre performers still haven't come down from the success of last summer's Bloody Bloody Andrew Jackson, but perhaps the armload of B. Iden Payne and Austin Critics Table awards helped Doctuh Mistuh Productions get even higher this year with a buzzing production of Reefer Madness…The cast is solid, with tightly rolled vocals, courtesy of McKelvey's legendary musical direction....”  - Austin Chronicle

“The zany show fits musical/stage director Michael McKelvey like a glove. The score, particularly the rock-fueled numbers, sounds fantastic, and his decision to keep the show consistently campy and melodramatic enhances the comedy and keeps the audience laughing. McKelvey's direction...utilize every inch of the intimate Spiderhouse Ballroom, often putting several of the performers in the aisles of the audience.” Broadway World

​“The show seems like about thirty minutes and gone too soon. Attribute this to the deft and efficient direction of Michael McKelvey, surefooted and fresh…” Central Texas Live Theatre


“You leave the theatre, an ache of a melody threaded through your chest, tribute to director and music director Michael McKelvey, who has crafted a tender, wistful anatomy of a relationship.” – Austin Chronicle


"Forgive me for gushing, but this is the sort of production that audiences are lucky to see: unique, intimate, beautiful, painful and wonderful."- Austin-American Statesman

“Michael McKelvey directs with the exact fast-paced gusto required. This can't have been an easy piece to put up — Timbers and Friedman really have created a barnburner.” - Pittsburgh City Paper

HEATHERS/DM Productions, Austin, Tx, July 2015
“Serving as both Director and Music Director, Michael McKelvey once again proves that he has his finger on the pulse of new and exciting music theatre. McKelvey has assembled the best up-and-coming local talent, and after seeing a production of the original Off-Broadway cast, I can honestly say that I preferred this cast both vocally and dramatically….” – Broadway World

NEVERMORE, The Imaginary Life and Mysterious Death of Edgar Allan Poe /DM Productions & Austin Playhouse, October 2016
“Michael McKelvey has created pure theatrical magic with this production that begins the moment the house lights snap out in synch with the music. Everything about this show is a pure delight. The end effect is like seeing a live action Tim Burton-esque film reminiscent of The Nightmare Before Christmas in both look and tone; it has that same macabre joy to it.” – Broadway World


“The nightmare sequences are delightfully horrifying retellings of Poe’s work, all of which Michael McKelvey (director) successfully staged to maintain the integrity of the original texts’ tones.” – Austin Entertainment Weekly

“Six nights into the run, audience members rose to their feet in a unified cheer of approval at show's end – which wasn't surprising after two hours of nearly nonstop laughter.”  ​- Austin Chronicle

​“Director Michael McKelvey who has always brought us great production has done it again delivering a production that “works”!  We look forward to many more from this power house of talent.... This show is a 6 out of 5 stars..." - Austin Entertainment Weekly

​“Director Michael McKelvey proves once again that he is the king of Chamber musicals, and musical theatre as a whole in his superb staging of this new musical.” - Austin Entertainment Weekly

“...directed by one of Austin's masters of musicals, Michael McKelvey..It is a chamber musical of no pretensions...Everything about this production is quick and smooth.” - Austin Chronicle

“Under Michael McKelvey’s direction, the song and dance numbers pull the audience laughingly along for the ride. While some songs deal flippantly with adult issues, there are also moments of sincere beauty.” - Austin 360

A YEAR WITH FROG AND TOAD/Summer Stock Austin, Tx

​B. Iden Payne Award - Outstanding Production of a Show for Youth

​“Director Michael McKelvey keeps the show blissfully simple. He smartly brings all the action to the downstage area…to make the action more immediate to the audience. He also doesn't treat the material like a children's show. Instead of letting his actors take the characters to over-the-top Hokey Land, an area in which most children's shows stray, his actors give us very grounded performances that are always interesting, funny, and sweet, but never cheesy, forced, or exaggerated. Though the characters are frogs, toads, and birds, this isn't a show about animals.  It's a show about friendship.”  Jeff Davis, Broadway World

“Chess is a strange little musical, but the cast and crew, led with skill by Michael McKelvey, are able to turn this tangle of material into something quite enjoyable.” - Austin Theatre Examiner


“Director Michel McKelvey tackles the project with zest.  He paints interesting, dynamic pictures on the stage, with characters swirling around each other as they attempt to get the upper hand.”  - Broadway World

Information about upcoming productions to come!  Please check back 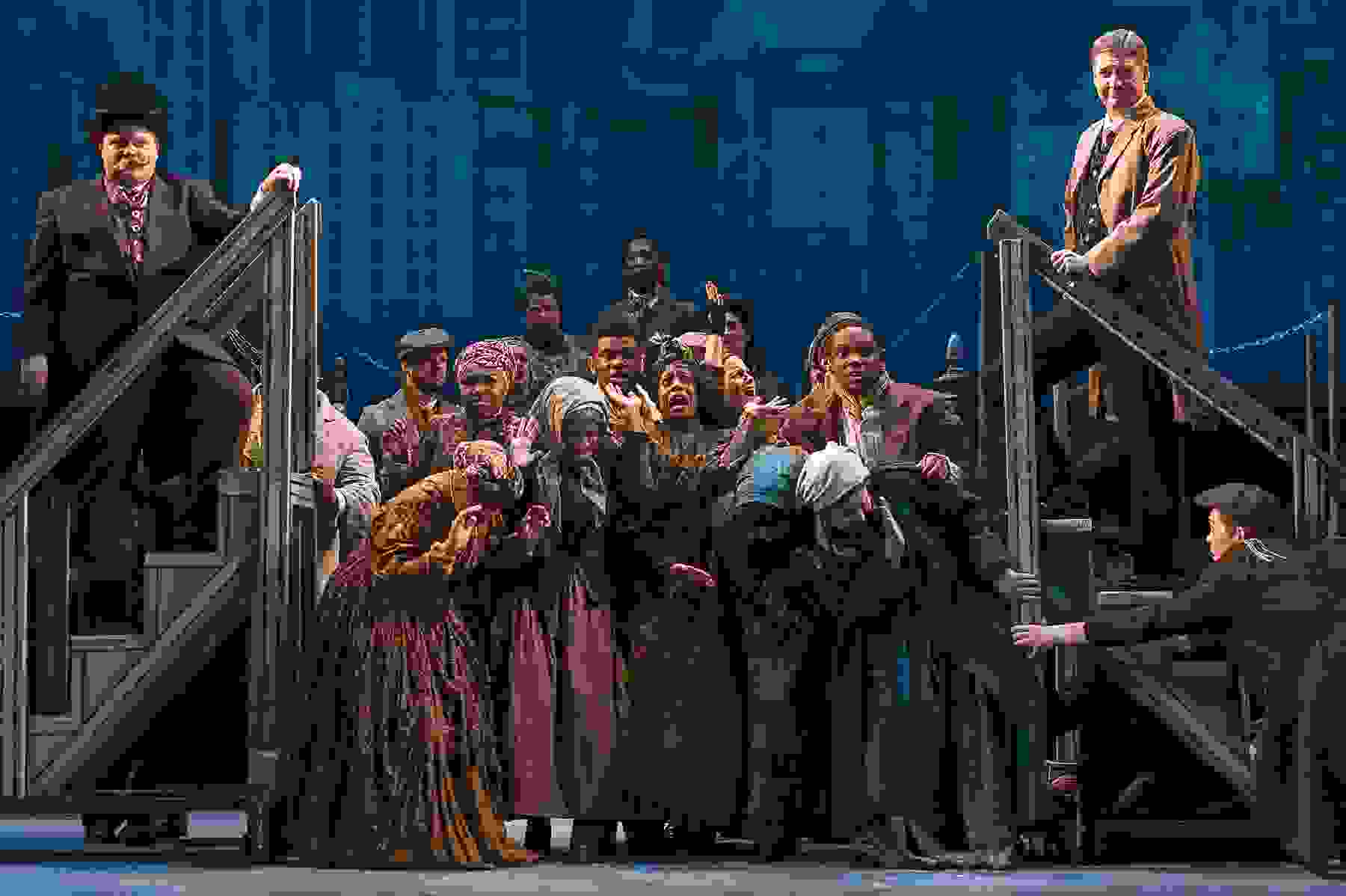 BEST DIRECTOR OF A MUSICAL  -  RAGTIME

BEST PRODUCTION OF A PLAY  -  HAND TO GOD

BEST DIRECTOR OF A PLAY  -  HAND TO GOD

CO-THEATRE PERSON OF THE YEAR

Friends of the Zilker Summer Musical

BEST PRODUCTION FOR YOUTH - A YEAR WITH FROG & TOAD

OUTSTANDING MUSICAL DIRECTION - CRAZY FOR YOU

Best Director of a Musical - Matilda